All this started way back in January 2016 when there were rumors that Hrithik didn’t want Kangana in Aashiqui 3. The word war that started between the two since then is not coming to end and people have now got bored and sick of it.

There was silence for some time, but the discussions on the same started back again. Kangana’s upcoming film Simran is about to release and so she is giving interviews all over. It is but natural that she is asked about this controversy and not holding back anything and is coming out bold as ever.

Now that people have enough of this controversy, which is not dying, the internet is full of memes on her interviews especially on her appearance last week at the show Aap Ki Adalat. 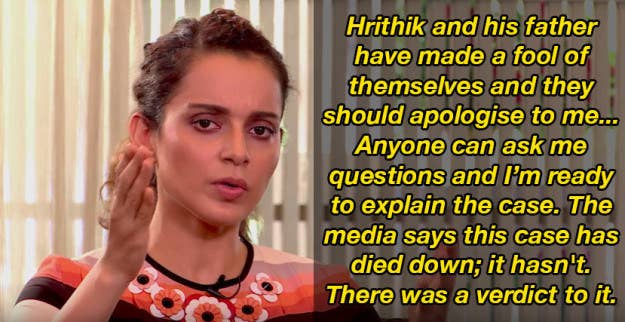 me when my friend asks "Goa chalega kya?" pic.twitter.com/RxOrQ1xYID

When friends buy tickets to the chainsmokers concert pic.twitter.com/19InFAqoRT

Me when colleague calls coffee from starbucks pic.twitter.com/hcOwGmchan

When someone orders a bisleri bottle in the restaurant. pic.twitter.com/VO3oRkB3PO

My mother when I tell her dad bought dinner so don't cook tonight pic.twitter.com/V4W5Sd3dba

My mother when I come home by UberBlack pic.twitter.com/dGiFIgkvwc